A dying bricklayer whose work included rebuilding the MCG has finally been awarded compensation after developing lung cancer linked to breathing the same deadly dust that hundreds of thousands of Australian tradies are still exposed to every day.

Jeff Marshall received the maximum no-fault WorkCover payment of $640,000 after developing lung cancer from working with crystalline silica dust without protection for much of his 40-year career as a brickie.

Crystalline silica still remains a dangerous byproduct of cutting bricks, while a newer threat is emerging – the stone used for kitchen benchtops.

Silica dust grains are 100 times smaller than sand, and block the lungs once breathed in, leading to a disease called silicosis which often precedes lung cancer. 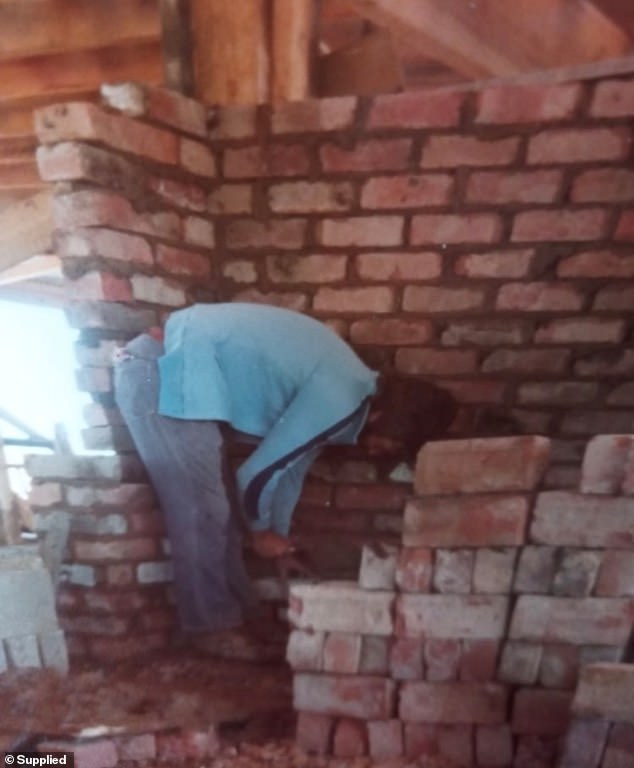 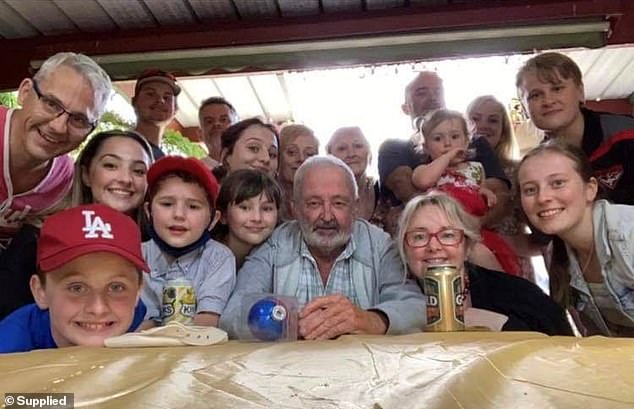 Jeff Marshall (pictured centre, surrounded by his family) received the maximum no-fault WorkCover payment after developing lunch cancer from often working without dust protection during his 40 years as a brickie

Silica dust is released into the air when tiles, stones and concrete are cut, drilled, crushed, ground, sawed or polished.

Mr Marshall said he had a firm message for any apprentices teased by fellow tradies or bosses for daring to complain about dust on the site: ‘Tell them stick it up your a***’.

While an estimated 230 Australians develop lung cancer due to silica dust each year, the numbers of tradies at risk – from bricklayers and stonemasons to carpenters and mechanics – are far higher.

The Cancer Council told Daily Mail Australia that 600,000 Australians are exposed to silica dust in the workplace every year.

New computer modeling done by Curtin University reveals 10,000 people are predicted to develop lung cancer in their from being exposed to silica dust and that 103,000 will develop silicosis. 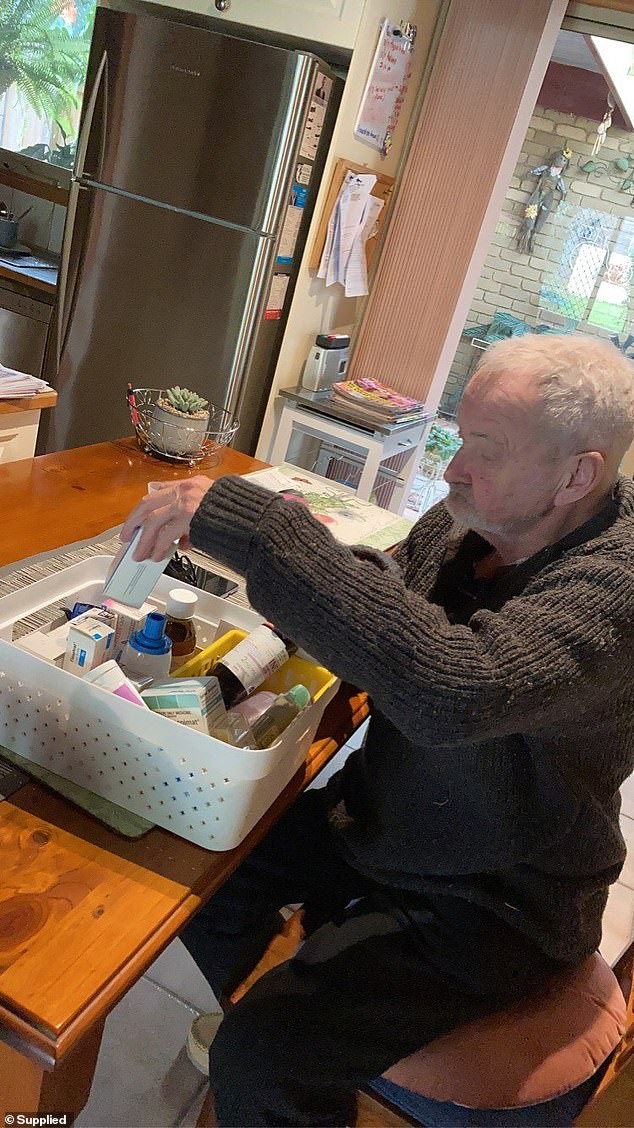 TRADIES AT RISK FROM LUNG DISEASES

Mr Marshall, a grandfather of nine, was active at home and built the family property he still lives in Wantirna, in Melbourne’s east.

Mr Marshall, who also played grade cricket and footy, always had enough energy to go straight into his garden after work.

‘Now I can only walk about as far as my letterbox,’ he said.

His breathing problems forced him to retire early at 60.

Just 10 years later, at 70, he has lung cancer and chronic obstructive pulmonary disease (COPD) and is in palliative care.

He no longer has medical care or hospital visits ‘because there’s no point’.

Mr Marshall worked for many years on sites without protection from breathing in crystalline silica dust, often from cutting bricks.

Among his many projects were the redevelopment of the MCG in 1988, the Melbourne Park Tennis Center and the CityLink tunnel.

He would often come home coated in silica powder from cutting bricks, often with a dry angle grinder. 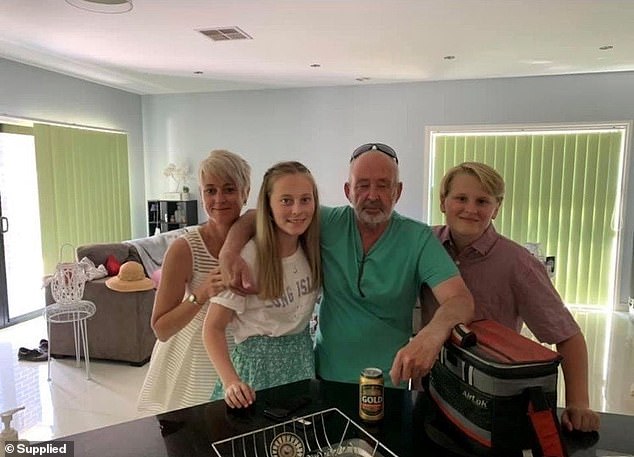 Shockingly, the practice of ‘dry cutting’ stone and brick is still a major concern today, the Cancer Council said.

Mr Marshall said the attitudes of bosses and colleagues throughout his career was ‘get the job done’.

He now advises anyone working with bricks, cement and tiles to ‘wear all the breathing protection you can get’.

If tradies ask for breathing apparatus, and bosses and colleagues deny it or give them a hard time, Mr Marshall urged them to stand up for themselves.

‘Most people fear for their jobs and they don’t want to rock the boat. But it’s not worth it.

Mr Marshall said even his own grandchildren, some of whom work with dangerous chemicals in gardening trades, don’t take protecting their lungs seriously.

‘I tell them to wear face protection, they go “oh yeah righto, we won’t do that, nah”.

‘They just think “we’ll be right” – exactly as I used to think, it wont happen to me. Well here it is, it happened to me.

‘The biggest problem is when you start cutting anything inside. It’s better to lay them outside in the fresh air.

‘Even the dust that comes off cement. It most assuredly won’t do you any good at all.’

HOW TO REDUCE DUST-RELATED DISEASES IN TRADIES

‘This means trades in industries such as construction, manufacturing, stonemasonry, mining, quarrying, tunneling, and demolition, are potentially at risk of developing dust-related diseases, including lung cancer,’ she said. 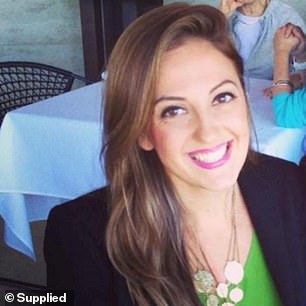 Ms Fritschi was most concerned about the ‘the uncontrolled use of power tools to cut, grind, trim, drill, sand, or polish materials containing crystalline silica’.

This dry cutting can generate very high levels of silica dust that is then breathed in by workers.

To reduce the risks, tradespeople are advised to wear tight-fitting respirators, cut stone and brick with wet tools, and use exhaust fans to blow it away from any people.

Law firm Maurice Blackburn runs so many occupational lung disease cases that it has had to dedicate a specialist team just for those claims.

One of the team’s lawyers, Emily Ormerod, said the cases are ‘heartbreaking’.

‘The vast majority are tradies, especially with silicosis on the rise,’ she said.

For the past 60 years, silicosis had been rare in Australia but the increased use of engineered stone in kitchen benchtops is driving a re-emergence of the disease, prompting the Australian Government to set up the National Dust Diseases Taskforce.

‘Our modeling predicts more than 10,000 Australians will develop lung cancer and up to 103,000 workers will be diagnosed with silicosis as the result of their current exposure to silica dust at work,’ said Dr Renee Carey, from the Curtin School of Population Health.

She told Daily Mail Australian tradies in their 30s and even late 20s are getting so sick they lose their careers and eventually their lives.

Ms Ormerod said young trades whose careers are cut short by lung diseases can in some cases be entitled to payouts in excess of a million dollars because of lost earning capacity.

She said even though there is more information available about lung diseases at work today than when Mr Marshall started his career, that doesn’t mean today’s trades are better off.

‘We want to tradies to ask the right questions and push for better protections if they don’t think they’ve got them, because any dust exposure is dangerous.’