As one of 17 air districts in California, the San Diego Air Pollution Control District (SDAPCD) is responsible for the implementation and enforcement of a wide range of laws and regulations concerning air pollution within its jurisdiction. Pursuant to authority delegated by the US Environmental Protection Agency (EPA), one such regulatory regime is the Asbestos National Emissions Standards for Hazardous Air Pollutants, also known as the Asbestos NESHAP. Asbestos was one of the first hazardous air pollutants designated by EPA pursuant to section 112 of the Clean Air Act, and sufficient exposure to asbestos is associated with adverse health effects including lung cancer, mesothelioma, and asbestosis.

Last year was an unusual year for SDAPCD asbestos enforcement. Large contractors and property owners engaged in significant renovation and demolition operations should take a particular note, as they are often the targets of such enforcement actions.

The Asbestos NESHAP, enforced locally through SDAPCD Rule 1206, applies to renovation and demolition operations. Subject to limited exceptions, regulated entities are required to (a) conduct a survey to confirm the presence or absence of regulated asbestos-containing material, (b) notify SDAPCD prior to engaging in regulated renovation or demolition activities, and (c) employ specified work practices to minimize the risk of asbestos release. Rule 1206 applies broadly to property owners, general contractors, subcontractors, asbestos consultants, and asbestos abatement contractors, among others, and the penalties for failure to comply are significant. It is not uncommon for large defendants to face multi-million dollar civil penalty demands even where there is no negligent or intentional misconduct and no evidence of harm or release to the environment. Criminal penalties are also available in egregious cases.

Despite the scope and potential liability of Rule 1206, SDAPCD’s enforcement of the rule varies. Between 2011 and 2014, SDAPCD’s asbestos enforcement activities were relatively limited, both in terms of the number of enforcement matters and the total civil penalties collected. Starting in 2015 and continuing through 2020, SDAPCD’s asbestos enforcement activities picked up substantially, with matters and civil penalties collected increasing many times over. Data collected through November of 2021, however, suggests that SDAPCD is reducing its expenditure of resources with respect to minor rule violations while prioritizing the investigation and prosecution of major enforcement matters.

SDAPCD’s enforcement of asbestos-related rules and regulations broadly falls into two distinct periods. The first period, between 2011 and 2014, is marked by relatively limited enforcement. Over this initial four-year period, SDAPCD reported a total of 117 civil enforcement actions, for an average of less than 30 per year. A majority of these actions—over 62%—were for relatively minor alleged violations (ie, survey and/or notice violations, without any practice or public nuisance allegations). Unsurprisingly, these minor civil enforcement actions typically resulted in de minimis penalty assessments (usually less than $1,000). 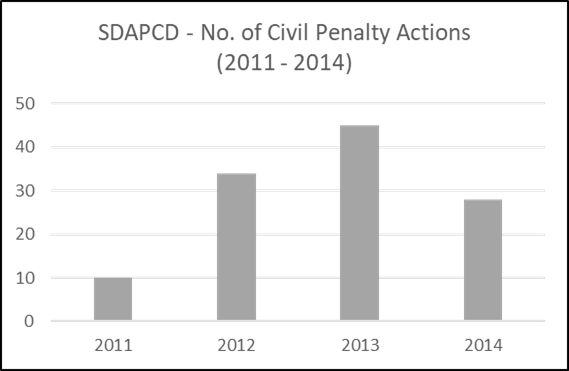 The second period, between 2015 and 2020, is markedly different. SDAPCD reported 79 actions in 2015, representing a roughly 182% one-year increase over 2014. SDAPCD continued to increase thereafter, reporting 150 civil enforcement actions in 2020—a 435% increase over 2014 figures. Total annual civil penalties increased by an even greater 585% over the same period, with a maximum single civil penalty assessment of $6.8 million in 2017. 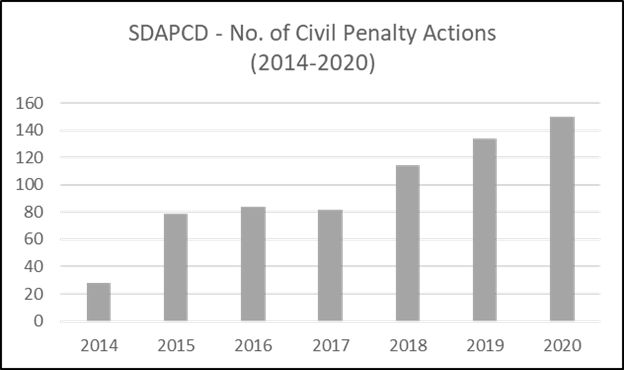 Source: Tables provided in this article are provided by data reported by SDAPCD in response to a PRA request.

Following a steady increase between 2015 and 2020, the volume of SDAPCD asbestos-related enforcement activity fell sharply in 2021. Based on data collected through November enforcement, SDAPCD reports just 79 civil actions in 2021, representing an almost 48% one-year decline in civil enforcement activity. This is the largest one-year decline in asbestos enforcement volume in a decade. Moreover, a relatively large percentage (70%) of 2021 asbestos-related enforcement actions were for minor alleged violations (ie, survey and/or notice violations under Rule 1206(d) and (e)(1), without any corresponding work practice or public nuisance allegations), and the civil penalties collected for these minor alleged violations fell by 35%—also to their lowest point in a decade. Interaction, total penalties collected by SDAPCD for asbestos-related civil violations increased by approximately 8%.

The disparity in SDAPCD asbestos-related civil enforcement in 2021 may be due to limited enforcement resources—especially due to COVID-related staffing impacts—and a corresponding shift in enforcement priorities. The significantly reduced overall volume of enforcement matters, as well as the decade-low civil penalties assessed for minor alleged violations, suggest that enforcement capacity is more limited in 2021 than it has been in prior years. At the same time, SDAPCD data shows that over 80% of all civil penalties collected in 2021 came from a single matter, which suggests that enforcement staff remain focused on and fully committed to resolving matters with significant alleged rule violations that may pose a greater risk to human health and the environment. 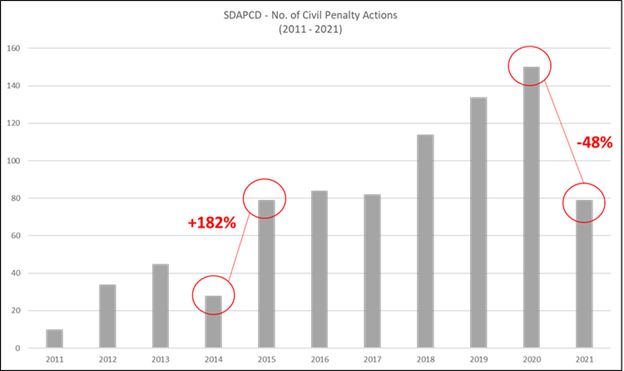 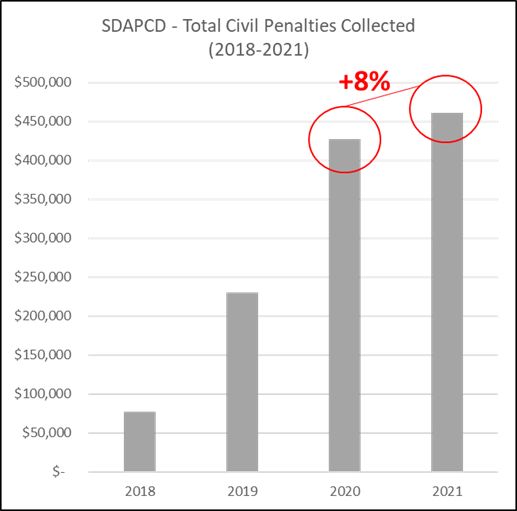 In 2021, asbestos enforcement volume declined by 48% year-over-year, the relative volume of minor enforcement actions increased to 70%, and the average civil penalty collected for these minor violations fell to its lowest point in a decade. After, total civil penalties collected by SDAPCD for asbestos-related enforcement matters increased by 8%, and these penalties were almost entirely the result of collections on a single enforcement matter. The disparity in this data suggests that SDAPCD is choosing to prioritize its potential resources on one or a few large projects with more significant environmental impacts, such as the much-publicized 101 Ash Street matter, while more efficiently resolving minor rule violations.

This approach, while sensible in an era of COVID-related staffing constraints, may not last. If anything, the relative lack of enforcement volume in 2021 may spur increased—and aggressive—enforcement in 2022 and beyond. Moreover, SDAPCD’s uninterrupted focus on major enforcement matters in 2021 demonstrates that it will prioritize investigation and prosecution of such matters even when faced with significant resource limitations. Large contractors and property owners engaged in significant renovation and demolition operations should take a particular note and consider refresher training on Rule 1206 compliance, as they are often the targets of such enforcement actions.

The content of this article is intended to provide a general guide to the subject matter. Specialist advice should be sought about your specific circumstances.