Many people have reportedly developed serious medical conditions and complications as a result of being exposed to asbestos, but whether or not one exposure to asbestos presents significant health risks is not as clear-cut.

What Is Short Term Asbestos Exposure?

Typically, short-term asbestos exposure is any exposure over a period of only a few days. However, even such limited exposure may cause an increased risk of developing negative health effects.

While long-term exposure Is often associated with serious conditions such as mesothelioma, short-term exposure to asbestos may, in some cases, also pose a risk—especially if a substantial amount of asbestos dust was inhaled at once. The amount of asbestos may have been substantial if the asbestos-containing product was damaged or crumbly, if the asbestos product was scraped, smashed, drilled or sawed, or if the area was poorly ventilated.

Some people claim that their talc-based baby powder contained asbestos. In this case, continual use of an asbestos-containing form of talc powder as part of a daily hygiene routine could amount to fairly severe exposure over time, even with light use on any given day.

Is One Exposure to Asbestos Really That Dangerous?

While most one-time exposures won’t do enough harm to damage the body, it all depends on how much asbestos was inhaled as well as other factors. Multiple short-term exposures, however, can lead to health issues since asbestos exposure can be cumulative.

Toxic exposure to asbestos during the 9/11 terror attacks, and the aftermath, have also resulted in serious illness and death. The toxic mineral can be especially dangerous when inhaled, such as in the case of 9/11 first-responders, and significantly increase the likelihood of serious medical problems. Although people who were in the vicinity of the attacks may only have been exposed to asbestos on that single day, thousands of first responders and other people who were exposed to the toxic dust in the air have been diagnosed with conditions and cancers.

What Are the Health Hazards of Exposure to Asbestos?

Asbestos exposure is believed to cause some 40,000 deaths every year, according to research by the International Commission on Occupational Health. These deaths may be due to several asbestos-related conditions.

Unfortunately, because of the long latency period of asbestos diseases — 20 years or more for cancers; At least 10 years for asbestosis — they are commonly diagnosed at later stages, which are typically more dangerous and difficult to treat. Many victims of asbestos-related conditions like mesothelioma are not diagnosed until their disease has progressed too far to be treated.

How Does Asbestos Cause Mesothelioma and Other Conditions?

When asbestos fibers are disturbed, these tiny particles may float through the air and be inhaled by people who are not wearing protective equipment such as masks or respirators. These fibers may settle in the lungs or chest cavity, where they can cause irritation and other damage.

As these fibers accumulate inside the body, the damage can lead to cellular changes; other issues caused by asbestos fibers include inflammation or DNA damage, which can be tied to even a single exposure to asbestos.

Over time, this irritation may lead to cancers including lung cancer or mesothelioma.

Asbestos is a fibrous mineral that is mined from the ground and is often used in industrial and construction materials. The substance is known for its strength and heat resistance, and may be found in roofing, fire-proofing, insulation, auto parts, and other industries. Although today the use of asbestos is regulated, many old appliances or buildings still contain the material. The asbestos found in old buildings may be especially hazardous, as it may be crumbling and releasing particles into the air. 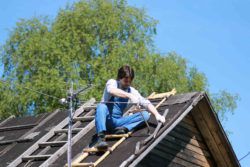 Even though one exposure is not as dangerous to a person as working in an environment with continuous exposure, it’s still important to be aware of the situation. Asbestos is more likely to be found naturally near fault zones, but since it was popular as a building material before its use declined, you might also disturb asbestos inside your own home when you’re doing home renovations.

When Is Exposure to Asbestos the Most Hazardous?

The dangers of asbestos exposure come from a person breathing the fibers in. Asbestos, according to Oregon State University, is most dangerous when it is known as friable, which means that the asbestos fibers can easily be crumbled by a person’s hand, therefore releasing dangerous fibers into the air.

Any asbestos insulation that was sprayed on is usually highly friable (easyly crumbled by hand) and therefore, very likely to cause damage.

Another situation in which one exposure to asbestos can be dangerous is when it occurs following an explosion or natural disaster during which asbestos fibers are collapsed and then dispersed throughout the air.

You may also come into contact with asbestos through the environment. If asbestos-containing rocks or products are moved and the fibers come up, this could lead to contamination of your air and resulting exposure or medical issues, depending on the volume. Shoveling dirt, using a leaf blower, or digging can all disturb asbestos in the environment. So, too, can activities like riding off-road vehicles or bicycling on an unpaved surface.

Even though it might take many years for an asbestos-related medical issue to come up, it is a serious concern if you move asbestos fibers in a home renovation or something like that where the possible volume is much higher.

Although it is possible to be exposed to asbestos through home renovations, contaminated products, or even the environment, most people are exposed to the dangerous substance through their occupation. People working in occupations such as construction, firefighting, roofing, mechanics, or railroad work may be most likely to come into contact with asbestos. In fact, record-breaking lawsuit awards have created precedents that asbestos in the workplace is almost certainly the cause of most cases of mesothelioma.

However, a few areas of Nevada may be a special case. There was an unusually high rate of mesothelioma in Clarke and Nye Counties in Nevada, according to new research published in the Journal of Thoracic Oncology.

Normally, mesothelioma strikes at a much higher rate in males over 55 years of age. This is because men over 55 were most likely to work in asbestos-related industries. However, in these Nevada counties, an unusually high number of women and young men were also diagnosed with the condition. Researchers concluded that in these parts of Nevada, asbestos and related minerals occurred in large amounts near the earth’s surface, causing naturally-occurring asbestos exposures.

When Could Asbestos Diseases Be Diagnosed?

Even when someone has been exposed to asbestos in a limited format, it can take decades for a medical condition to develop. Asbestos-related cancers can take up to 50 years before the patient notices side effects.

For example, 36 years after working with asbestos ceiling tile products, numerous Minnesota workers now suffer from lung problems and cancers. In 1993, the Minnesota Department of Health conducted a study which showed that around 30% of former Conwed Corp. workers showed signs of lung abnormalities linked to asbestos exposure. Since then, there have been 39 cases of mesothelioma amongst Conwed workers, according to the Pine Journal in March 2021. 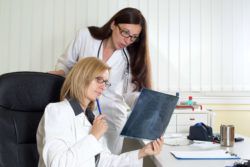 Mesothelioma and lung cancer are particularly deadly kinds of cancer, but as they often show no symptoms at first, patients may go a long time before being diagnosed.

When patients do begin to exhibit symptoms, they often report pain in the chest, shortness of breath, wheezing, fatigue, and coughing. In some cases, victims may also report symptoms including lumps or tumors under the skin, or clubbing or widening of the fingertips.

Patients are often diagnosed after they begin to show symptoms. This means that many patients face a mesothelioma or lung cancer diagnosis once their cancer has advanced to a late stage, lowering their chance for survival. The five-year survival rate for patients diagnosed with mesothelioma is around 10%.

Early screening for cancer is the most effective way to give patients the best chance of survival, so patients who are at risk for asbestos exposure or who were previously exposed may want to be screened. People who may benefit from screening include those people who work in industries in which asbestos exposure may have been likely, such as construction, shipping, renovation, electricity, and the military.

Since second-hand exposure is also a risk, people whose family members may bring back asbestos fibers on their clothing may also want to be screened. Workers in fields where they are exposed to asbestos may want to take steps to prevent these fibers from being carried home to their families. In addition to changing clothes and shoes before coming home from a job site, workers may also want to shower in order to remove particles from their skin or hair.

A growing number of people are coming forward with lawsuits alleging that they were diagnosed with mesothelioma due to asbestos exposure. Litigation has led to significant settlements for those suffering from asbestos mesothelioma and their families.

If you or someone you love has been diagnosed with mesothelioma, lung cancer or another disease after exposure to asbestos, you may be able to file a lawsuit and pursue compensation. Filing a lawsuit cannot take away the pain and suffering caused by such a diagnosis, nor can it bring a loved one back to life, but it can at least help to alleviate the financial burden incurred by medical expenses, lost wages, and more.

Filing a lawsuit can be a daunting prospect, so Top Class Actions has laid the groundwork for you by connecting you with an experienced attorney. Consulting an attorney can help you determine if you have a claim, navigate the complexities of litigation, and maximize your potential compensation.