The incidence of esophageal cancer in middle-aged adults nearly doubled from 2012 to 2019, according to a study of more than 5 million Florida residents.

As there was no increase in esophagogastroduodenoscopy during the study period, the researchers concluded that these data reflect a true increase in the prevalence of esophageal cancer.

“Whenever we see increasing prevalence of any type of cancer, we should ask whether this is merely due to better screening or it is a true increase in the disease prevalence. In our study, it was due to the latter,” Bashar J. Qumseya, MD, of the University of Florida in Gainesville, said in a press release.1

Dr Qumseya presented results from this study in a press briefing in advance of Digestive Disease Week 2022. The full results are scheduled to be presented at the meeting later this month.2

“This strong growth in prevalence should be of concern to physicians, and we should consider screening more middle-aged patients for esophageal cancer if they are at higher risk,” Dr Qumseya said.1

“From other analyses we have conducted with this dataset, we know that even patients with 4 or more risk factors for esophageal cancer are not having endoscopies,” he added. “So, from both the patient and provider perspective, we can do better.”

“Many patients in the US now have colonoscopies starting at age 45, so conducting an endoscopy at the same time, among those with multiple risk factors, could help capture more patients with Barrett’s esophagus and esophageal cancer,” he concluded.

2. Qumseya C, Salloum R. Alarming increase in prevalence of esophageal cancer and Barrett’s esophagus in middle-aged patients: Findings from a statewide database of over 5 million patients. To be presented at Digestive Disease Week 2022; May 21-23, 2022. Abstract 671.

Please login or register first to view this content. 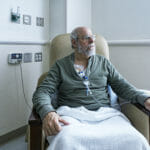 CancerTherapyAdvisor.com is a free online resource that offers oncology healthcare professionals a comprehensive knowledge base of practical oncology information and clinical tools to assist in making the right decisions for their patients.
Our mission is to provide practice-focused clinical and drug information that is reflective of current and emerging principles of care that will help to inform oncology decisions.

Copyright © 2022 Haymarket Media, Inc. All Rights Reserved
This material may not be published, broadcast, rewritten or redistributed in any form without prior authorization.
Your use of this website constitutes acceptance of Haymarket Media’s Privacy Policy and Terms & Conditions.
You’ve read {{metering-count}} of {{metering-total}} articles this month.
We want you to take advantage of everything Cancer Therapy Advisor has to offer. To view unlimited content, log in or register for free.
{{login-button}} {{register-button}}
Want to view more content from Cancer Therapy Advisor?
Register now at no charge to access unlimited clinical news, full-length features, case studies, conference coverage, and more.
{{login-button}} {{register-button}}
Please login or register first to view this content.